The Torah commands that several groups of soldiers be absolved of their military obligation. Why? Is this for the benefit of the war? Or maybe for some social purpose?

A. The Fearful and Faint-Hearted

In this week’s Torah portion, several groups are sent home from the battlefield. Those who have new homes, vineyards, and wives, and those who are afraid (source 1). What exactly does “afraid” mean? The Talmud records an argument between Rabbi Akiva and Rabbi Yosi: According to Rabbi Akiva, that means fear of the battlefield, while according to Rabbi Yosi, it means fear of one’s sins (source 2).

In a long talk in 1979, the Rebbe analyzed the argument at length. He explained that Rabbi Akiva could not possibly side with the opinion of Rabbi Yosi, because Rabbi Akiva was a famous lover of Israel. As he saw it, the moment a Jew begins to contemplate his sins, he has already made a step towards repentance. In that case, he has no reason to fear the battlefield!

The Rebbe’s understanding of the issue is quite reminiscent of the debate after the Entebbe raid: The Rebbe spoke about the unique merit of the soldiers, while other religious leaders argued that secular soldiers cannot be a conduit for G-d’s miracles.

There is another lesson in Ahavat Yisrael which we can learn from the other opinion — that of Rabbi Yosi, as expressed in Source 3, 4 and in the Rebbe’s talk.

According to Rabbi Yosi, death is always a result of sin, and therefore, only the sinful soldiers have reason to be afraid. Why then, are the other groups sent home? The answer: To provide cover for the soldiers returning due to their sins. 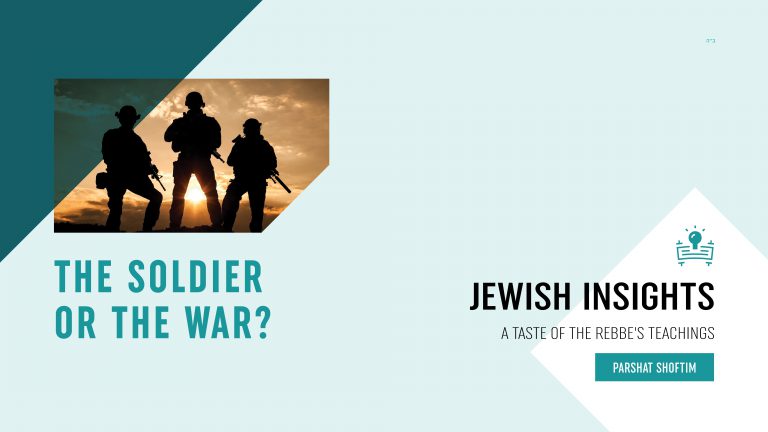