We all love to celebrate Chanukah, the holiday which marks our victory over the Syrian Greeks and the miracle of the oil. Did you know that it took the sages a full year to decide whether they were victorious? Behind the scenes in the Chanukah story.

When was Chanukah established as a holiday? In the Talmud, we read an interesting statement: the holiday was not established immediately; rather, it was established the next year (Source 1).

The Rebbe points out that this was not the case on Purim — which was established immediately. Why was Chanukah different?

The (literal) answer can be culled from the ruling in Jewish law that a new law must be accepted by the population in order for it to become obligatory (Source 2). In the story of Purim, we see an initial effort to establish a holiday during which work is prohibited, but that plan was dropped (Source 3). As the Talmud explains, the Jewish population rejected the idea (Source 4).

Thus, the Rebbe explains, the sages in the story of Chanukah drew on the story of Purim and therefore chose to wait before establishing a new holiday — to first determine public opinion.

B. Who Won the War

However, there is also a deeper reason for the wait. Chanukah is unlike Purim, in that it is a victory of the spirit. The Jews weren’t threatened with death; they were forced to abandon their religion (Source 5). The Syrian Greeks tried to force the Jews to renounce Judaism (Source 6), prohibiting Jewish observance (Source 7). This wasn’t only a project of the Syrian Greek conquerors; they were aided and abetted by Hellenist Jews as well (Source 8-9).

The Rebbe explains that the sages didn’t wait a year to see which customs and observances would be established in the new holiday. They were waiting for something far more important; they wanted to see who had won the struggle; would Jews embrace Judaism or continue assimilating and becoming Hellenists. Only at the close of the year, when the sages were confident in their spiritual and moral victory, did they establish the festival of Chanukah. 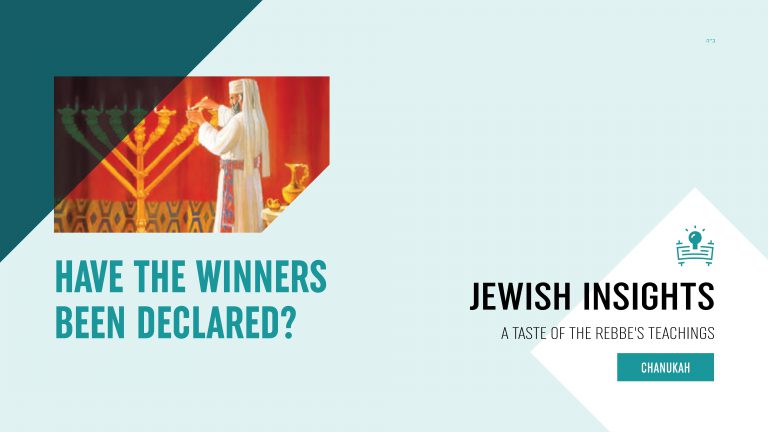