Some religious leaders speak derogatorily about others. How did G-d respond to such behavior? What did Rabbi Eliezer do when faced with a similar situation? What did the Rebbe say?

There are many worthy rabbis and adult educators, but some profess expertise while being wholly unqualified; in the words of our sages, they are “unworthy of instruction—yet instruct.”

What is this about? The month of Elul has begun and rabbis have started preparing their sermons for the High Holidays, Shabbat Selichot and so on (after they’ve returned from their summer vacations). Some are under the impression that sermons in the month of Elul and during the High Holidays need to be full of anger, following the mold of the verse, “Can one hear the Shofar’s call and not tremble?” In fact, these days are called “Days of Awe,” so, they assume, the style of education must be “fire and brimstone.”

He thinks that the angrier the sermon, the better the educator. In his perception, willingness to anger your listeners shows your selfless devotion to education. For the sake of Heaven, you are willing to tell off another person.

The angrier it is, the more pleased he is with his performance. He is a true orator—he knows how to tell another person off…

But first and foremost, Torah states a basic rule: “The words of the wise are accepted when spoken gently.” We can also infer the opposite: If you don’t speak gently, your words will not be accepted, and sooner or later, you’ll lose your following—whether immediately, the next day, or sometime later. Nobody will follow your guidance.

Even if you are not wise, there is no need to yell from the pulpit that when Torah equates wisdom with gentleness, it is not referring to you.

But moreover: Every honest person is aware of his own spiritual lacking. So how can you stand before an entire community and belittle them with such shocking declarations, Heaven forbid?

The Torah relates that when G-d commanded Isaiah to serve as a prophet to the People of Israel, Isaiah—in his response—made a derogatory comment about the Jewish people (“I dwell among a people of impure lips”), and he was immediately punished for his statement (“One of the angels flew to me holding a glowing coal; he had taken it from the altar with tongs…”).

His derogatory statement was not declared publicly, G-d forbid, nor was it meant to shame anyone. Isaiah was in the midst of a private dialogue with G-d and he needed to respond to G-d’s request that he fulfill a specific mission (to serve as G-d’s prophet to the Jewish people). Certainly, he needed to tell G-d the truth (after all, G-d is the “G-d of Truth”), and the truth was that he was afraid of the mission, because “I dwell among a people of impure lips.” Certainly, G-d Himself, “who sees directly into the heart,” was also aware of the spiritual state of the Jewish people; in fact, in the same conversation, G-d critiques the Jewish people, “This people’s heart is becoming fat.” And yet, Isaiah was punished for expressing himself in a negative way about the Jewish people.

The Torah is careful to use positive language, whenever the subject matter does not have implications in Jewish law. For example, the Torah says that “animals which were not pure” entered Noah’s ark. This describes an event which took place before the Torah was given, and the description is not relevant to the laws of Kosher food. However, when the subject matter has practical implications—to teach the reader what is kosher and what is not—the Torah uses more direct language: “Separate between the tamei-impure and the pure animals.”

In our case, Isaiah’s description of the Jewish people had very practical implications. He was telling G-d that he cannot serve as their prophet specifically because they were a nation of “impure lips.” Nonetheless, his description was inappropriate. One should never speak of G-d’s people in that manner, even though he merely criticized their lips for being impure—making no comment about their minds and hearts—and even though his comment was made in a private conversation which had real-life consequences.

Since this story was shared in Torah, it obviously contains an eternal lesson, because “the Torah will never be replaced”—its message remains in effect at every place and time!

Learn a Lesson from Isaiah

The lesson is clear:

Most people occasionally feel an urge to criticize someone. They might assume that the critique is well-intentioned, and that it comes from a place of love and concern for the person’s spiritual and moral well-being. Out of an abundance of ahavat yisrael, love for your fellow, you want to criticize him.

This story teaches us: There was no greater “lover of Israel” than the Prophet Isaiah. [His name is often compared to his counterpart, Jeremiah. Jeremiah’s Hebrew name, Yirmiyahu, contains the word mar, which means bitter. Isaiah’s Hebrew name, Yishayah means salvation. Indeed, Jeremiah prophesied bitter and unfortunate events like the destruction of the Temple, while Isaiah was a prophet of comfort who prophesied salvation]. Nonetheless, he suffered immediate consequences for expressing himself negatively about the Jewish nation, even though he did so in a private setting, as we explained above at length.

Isaiah’s Error Teaches Us a Lesson

But why did Isaiah express himself that way, if he was indeed the great lover of Israel who was chosen to be the prophet of redemption?

Our sages said of King David, “That sin was out of character for him.” But, they explain, “it provided an opening for penitents,” and “established the power of repentance.” This is a similar case: Isaiah did an act of self-sacrifice and gave later generations the ability to correct such behavior.

The Talmud relates the following story:

The final Mishnah in Tractate Megillah chapter 3 speaks about the specific details of various Haftorahs. It says there: “Rabbi Eliezer says that we do not read the Haftorah of ‘Inform Jerusalem…” This refers to Ezekiel 16, which speak negatively about Jerusalem. According to Rabbi Eliezer, this segment was not to be read as a Haftorah, “for Jerusalem’s honor,” so as not to insult its inhabitants.

Rabbi Eliezer was upset at him for choosing this Haftorah, even though a Haftorah is a direct quote from the Prophets and not the individual’s personal ideas. He felt that the choice to read this Haftorah implied a deeper problem with his education, which is why he told him to scrutinize his own origins—which were found to be lacking.

This Mishnah which tells us not to read that Haftorah, and especially the story of Rabbi Eliezer, are a powerful lesson about how careful we need to be to protect the dignity of G-d’s people.

Another important point: Even when you speak gently, choose to speak about good and about reward, instead of about evil and punishment.

Why focus on the negative when you could focus on the positive? Speak about reward for fulfilling Mitzvot, the reward for repentance, and so on. The Torah is filled with descriptions of reward, both in the Five Books of Moses—“If you follow My laws and safeguard my commandments… I will provide rain in its season”—and even more so in the Prophets, and even more so in the Oral Torah. There is plenty of uplifting material for speeches that will suffice for the month of Elul, the High Holidays and the entire month of Tishrei—there is enough for all year round. You’ll never run out of material.

G-d forbid to mention a person’s weak point, especially since you don’t know what brought him to that situation. As the Mishnah rules, “Judge every person favorably,” and “Don’t judge a person until you live through his experience.” The books of ethics and Chassidism expound on this concept in detail. How much more so, during a public speech!

And most importantly: Derogatory talk stems only from a lack of good character traits. It is totally ineffective—you will inspire people to improve themselves much faster if you speak in gentle and positive terms about the benefits and rewards of keeping the commandments, and you will automatically achieve your goal to keep them away from sin.

In simple terms: The best and most effective way to inspire others to improve themselves is by drawing attention to their potential. They can each acheive great spiritual heights—to the extent that, as Maimonides says, “through one good deed, you have the power to tip the scale for yourself and for the entire world—to good.” 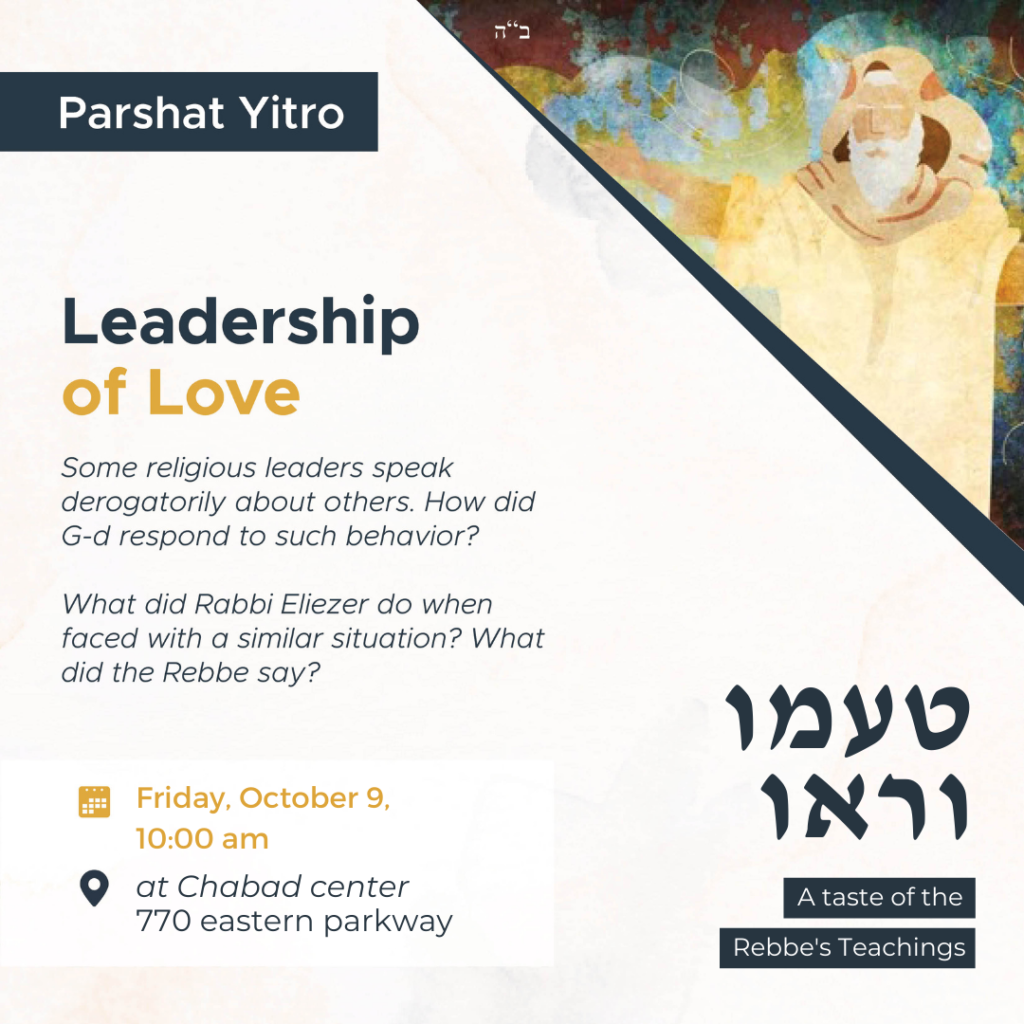