The Torah contains nine ‘songs.’ The Song of Moses, the Song of David, the Song of Miriam, and so on. Jewish tradition seems to cherish the songs of the women. Why so?

Why the Women’s Song?

Twenty years ago, on the last day of Passover in 1938, my father-in-law the Rebbe spoke about this week’s Haftorah.

This week’s Parsha contains a song of men and women, respectively. First Moses and all the men sang praise to G-d, and then Miriam and the women took out musical instruments and sang praise to G-d as well. So, why was it the song of a woman, the Song of Deborah, chosen to be the Haftorah?

The Alter Rebbe proceeded to share a long story (which is published in the above-mentioned talk). He concluded, that although both the men and women sang praise to G-d when they left Egypt and crossed the sea, the women did so with music and dancing. They sang their praise in a much more joyous way. Therefore, the Song of Deborah—a woman—was chosen for the Haftorah.

Why Were they More Joyous?

But now, a new question arises: Why, indeed, weren’t the men as joyous as the women?

The answer is quite simple: When we receive something without investing effort, it is impossible to experience the same level of joy and gratification as an individual who worked long and hard to attain the same exact thing. Our Sages say, “Reward comes according to the anguish.” The joy and satisfaction will always reflect the effort and toil that had been invested.

When the Israelites left Egypt and sang praise to G-d for their salvation, the men could not have possibly felt the same sense of joy that Miriam and the women felt at that moment.

The worst of the Egyptian persecution began during Miriam’s childhood. The greatest atrocity—was the drowning the newborn boys in the Nile. All of their suffering—slaving away in inhuman conditions—paled in comparison to the terrible decree of the killing of the newborns. Our sages also related that this came after a different atrocity occurred: Pharaoh would bathe in the blood of Jewish children.

This all is experienced by mothers more than fathers. Therefore, when they finally escaped Pharaoh and his evil decrees, the joy of the women was far greater.

Why is this Shabbat Called ‘Shirah’?

However, there are other Torah portions with songs. Why are those weeks not called Shabbat Shira?

For example: Parshat Chukat contains a short song by the People of Israel, “Rise, O well, respond to this song…” as explained in Rashi’s commentary. However, this is not such a strong question. After all, the song is only a short segment of the Torah portion which contains a wealth of topics.

The question is from Parshat Haazinu, which contains a song as well. This song, in fact, covers more of the Torah portion than the Song of Moses in this week’s portion.

Regarding the Haftorah as well: On the week of Parshat Haazinu, we read the Song of David. Seemingly, the name “Shabbat Shira” should be given to Parshat Haazinu and perhaps to this week’s portion as an addition. But for some reason, this week is called Shabbat Shira and the other is not.

The Women’s Song is More Significant

One explanation: The Previous Rebbe gave a well-known talk about this week’s Haftorah. He noted that it was not the song of a man, like the Song of David in the Haftorah of Haazinu, rather, it was the song of a woman, the Song of Deborah (in commemoration of the Song of Miriam and all the women in the Parsha) [for the reasons he explained there].

Therefore, we call this week Shabbat Shira—specifically in the week where we read a woman’s son, both in the Parsha—the Song of Miriam, and also in the Haftorah—the Song of Deborah.

Women Will Bring the Redemption

Torah is all about action. When we study in the Torah about the importance of the Song of Miriam and the Song of Deborah, it is a message that we should once again highlight the merit and the responsibility which is placed on “the righteous women of the generation.” And when they show true leadership, all other women and girls follow along just as they followed Miriam, and they will all sing together, “Sing to G-d for His great victory.”

And their own daily conduct, and the conduct of their households as well, will reflect the will of G-d. The words of the song, “ki ga’o ga’ah, G-d is exalted beyond all exalted”—there is no reason to fear anything, because G-d transcends them all,

And this will channel the redemption from the Torah—into reality. 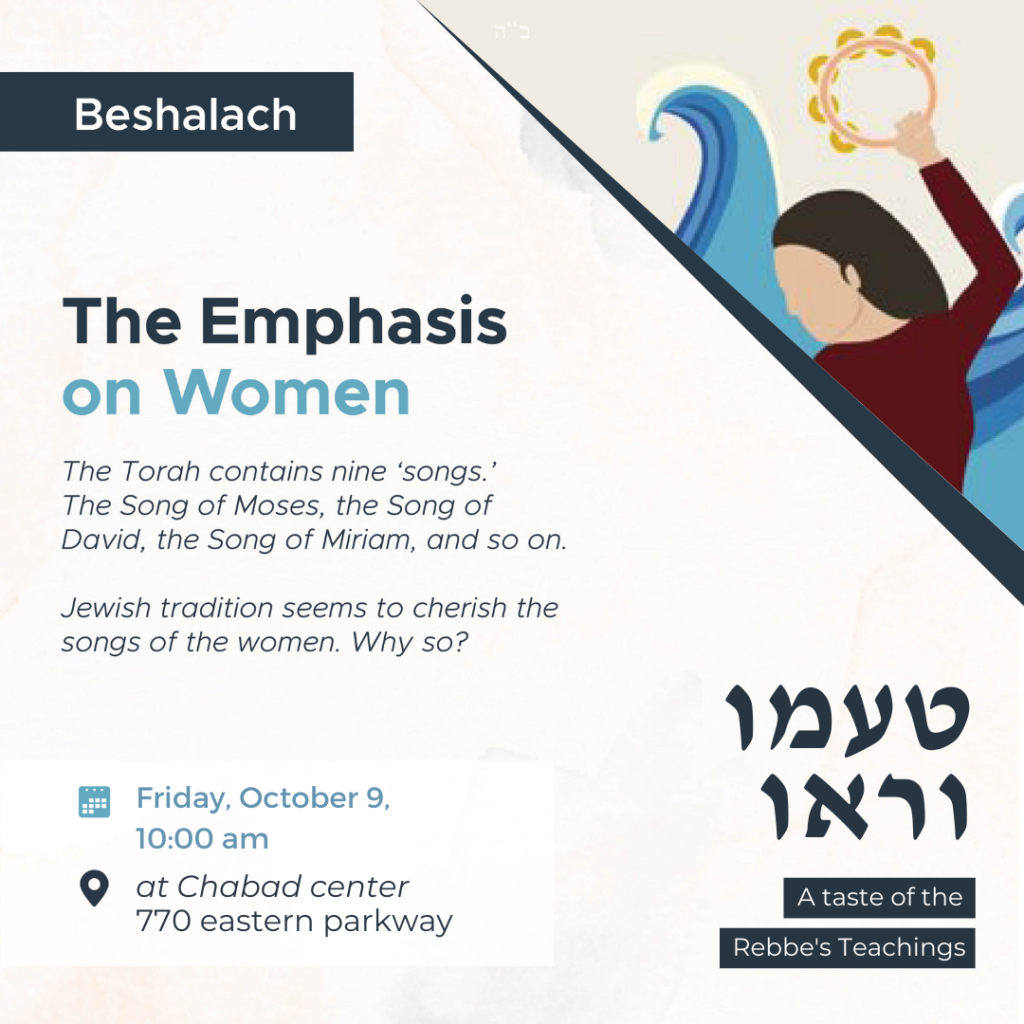