When Pharaoh suggested to drown the newborns, what were his advisors to do? Object and face the consequences, or agree and work with the circumstances? When faced with a moral dilemma, do you make do with the situation or take a principled stand? A fascinating lesson from Bilaam, Job and Jethro.

The Talmud relates in Tractate Sotah:

“Pharaoh consulted with three people [as to what should be done with the Israelites.] Bilaam, and Job, and Jethro. Bilaam, who advised [to enslave the Israelites and kill all sons born to them] was later killed. Job, who remained silent, was punished by suffering. Jethro, who fled, merited that his children’s children served in the High Court in the Temple.”

The heavenly consequences for each of the three attitudes—Bilaam’s suggestion, Job’s silence and Jethro’s escape—raises questions:

“Bilaam advised [to enslave the Israelites and kill all sons born to them] and was later killed.”

Bilaam served as an advisor to Pharaoh, king of Egypt. Thus, it was his moral obligation to advise Pharaoh with Egypt’s best interest in mind. The negative impact his suggestion would have on the Israelites should not be his concern. Pharaoh did not ask for his advice in benefiting the Israelites. To the contrary: Pharaoh was concerned about the high Israelite birthrate and the potential crisis it would bring. It was therefore Bilaam’s obligation to devise a plan that would counter the threat. If he was fulfilling his duty as advisor to Pharaoh, the question arises: Why did he deserve such a severe punishment? Why was he punished altogether?

To the contrary: Bilaam deserves a medal! He faithfully and fearlessly discharged his duty to counsel Egypt. We should not forget that Bilaam was a prophet. The Torah says that he knew G-d’s will and had visions of prophecy comparable to the prophecies of Moses, the greatest prophet of all time. He surely understood the risk-factor involved with harming the children of Abraham, Isaac and Jacob. Nonetheless, he fulfilled his obligation as Pharaoh’s advisor and advised him in Egypt’s best interest in mind.

Yet, the Talmud is highly critical of his decision and says that he was punished with death. How does this square with Torah’s aim of truth and justice?

We can pose the same question about Job, who “remained silent and was punished with suffering”:

Job clearly did not want to harm the Israelites. However, fearing Pharaoh’s wrath, he chose remained silent. Why does he deserve to be punished? He did not cause the Israelites any harm!

On the other side of the coin, if the Talmud is critical of Job, it should have put it differently:

Pharaoh consulted with three advisors. It is highly plausible that he would have followed the majority opinion. Thus, had Job sided with Jethro (who spoke well of the Israelites and had to subsequently flee Pharaoh’s wrath), Pharaoh would have followed their advice and abolished the decree against the Israelites. Since Job remained silent, the two opinions of Bilaam and Jethro remained equal and Pharaoh made his own decision.

Our criticism of Job should be (not that he remained silent but) that he didn’t speak positively of the Israelites and seek to abolish Pharaoh’s decree. Yet the Talmud chooses to say, “he remained silent.” Instead of criticizing him for not defending the Israelites, it criticizes him for his silence – although his former seems to be more damning.

A regular person could not have been any wiser than Pharaoh. But Bilaam was a prophet and knew G-d’s will, so he should have told Pharaoh outright: “You are correct in your assumption that the Jewish birthrate might be dangerous, but harming is even more dangerous, because you would be causing harm to the pupil of G-d’s eye.”

Being committed to Egypt’s wellbeing as Pharaoh’s advisor, he should have told him the full truth. He should have done so even if it wasn’t what Pharaoh wanted to hear, and even though he would be subsequently forced to flee (to save his life for opposing the wishes of Pharaoh).

So this is the criticism of Bilaam: He was so intimidated by Pharaoh that he failed to recognize the truth and instead tried to please his master, telling him what he wanted to hear and what he thought was actually in Egypt’s best interest, when it was, in fact, profoundly destructive to Egypt, Pharaoh and his army.

The criticism about Job is similar.

The task of an advisor is to give an opinion – whether it is popular or not. If you are committed to your duty as an advisor, you take a side, irrespective of the attractiveness of your opinion.

Now, some people prefer to please everyone, but that is not always possible. When one side says, “throw the newborns into the river,” and the other side says, “don’t touch the pupil of G-d’s eye,” there is no middle-ground with which to please both. In that instance, he chooses to offer no opinion at all. Thus, he will be able to comfortably approach both sides and say, “Consider me your good friend; I said nothing against you.” Job is comfortable with the Talmud’s account of his silence. Now, he cannot be accused by Bilaam of contradicting him, and nor can he be accused by Moses; he said nothing that would harm the Jewish people…

Thus, although we can justifiably criticize Job for not having supported the Israelites (potentially abolishing the decree or at least removing any blame from himself), there is a much stronger charge: How could he remain silent? If you were—by Divine providence—appointed as an advisor, you need to find the strength to convey your opinion! If you don’t have that strength, resign and head home…

Anything is better than a policy of pleasing everyone. Job understood that drowning the Jewish newborns would harm the Israelites and harm Egypt as well, and he still remained silent – irrespective of his duties as senior advisor to the king and one of the three individuals to whom the question was posed. Even if he wouldn’t have been one of the three, the obligation would rest on him to protest. Yet he would take pride in his decision to remain silent, because it allows him to profess good terms with Bilaam and Moses in unison.

This, the Talmud says, is worse than ignoring the Israelites’ plight.

What Was Jethro’s Calculation?

Jethro is mentioned third in the Talmud’s account – after Bilaam, who suggested to drown the newborns, and Job, who remained silent. At that point, Jethro understood that he wouldn’t be a tiebreaker; at most, there would be two equally supported opinions: Jethro versus Bilaam. No doubt, Jethro knew Pharaoh’s personal preference; after all, he fled after conveying his opinion.

With that in mind, his choice to oppose Bilaam seems irrational.

If he knew that his opinion would not sway Pharaoh, perhaps it would have been better that he remain silent regardless of his personal opinion. He could have thereby remained Pharaoh’s advisor and retained the ability to aid the Israelites in other matters. Pharaoh indeed commanded the killing of all boys, but girls were to be kept alive. Had Jethro remained among Pharaoh’s close circle of advisors, he could have ensured the spiritual wellbeing of the girls, in keeping kosher, Jewish education and so on. But because he opposed the proposed killing, he was forced to flee – leaving the Israelites helplessly in Pharaoh’s hands… How was that beneficial to the Israelites?

You may argue: How could Jethro possibly agree in good faith to Pharaoh’s plan to drown the boys? But did he really have any better option? He should have, at least, remained to seek out the welfare of the girls – to save the girls and their parents. This would also allow him to protect them from slave labor and tend to their needs in general. Seeing no possibility to abolish the decree, he should have used his knowledge of Jewish law and his own logic to make a calculation:

He has an important job with Pharaoh, the ruler of the world’s greatest superpower. He is one of three senior advisors; clearly, Pharaoh values his advice. If so, there is no reason for him to uselessly support a minority opinion and then flee to Midian, leaving Pharaoh and Bilaam alone (with Job remaining silent). This would mean totally abandoning the Israelites in Egypt!

In different terminology: You may want to remove yourself from anything that does not coincide with Torah’s values, in order to demonstrate your commitment to Torah. But that means you are willing to abandon the education of all Israelite girls in Egypt, the kosher food of all Israelites in Egypt and the potential of alleviating their suffering – just for your own honor; just to demonstrate how principled you are!

Perhaps you should bend your principles for five minutes? It will make no practical difference; the majority opinion is against you either way. But by remaining on Pharaoh’s good side, you will retain your post as senior advisor and you will be able to look out for the Israelites ‘from the inside.’

Be Principled and Take a Stand

But no matter how powerful this question may be, the Talmud doesn’t see it that way!

Jethro didn’t need to think twice. He knew exactly what he was supposed to do. He knew that his would be a minority opinion and he would need to flee (as he indeed did), but nevertheless, when Pharaoh asked for his opinion, he did what an upright human being does: he said the full truth, without machinations. What about exchanging the life of the boys for the wellbeing of the girls? Jethro says that it’s not for him. He is bound by his ethics.

Being an upright person, he understood his duty as an advisor. Remaining silent wasn’t an option, nor was playing games. Our sages said, “Do not measure the various mitzvos of the Torah against each other.” Likewise, they said, “Why is one person’s blood redder than another’s?” The baby boy’s life is not worth more than the baby girl’s…You have no right to negotiate with human lives.

This mode of conduct brings about two results: Pharaoh and his cohorts lose their influence, and “the People of Israel leave exile with an upraised arm,” and moreover, “with great wealth.”

To listen to the full-length Sicha, click here: https://ashreinu.page.link/nSRg 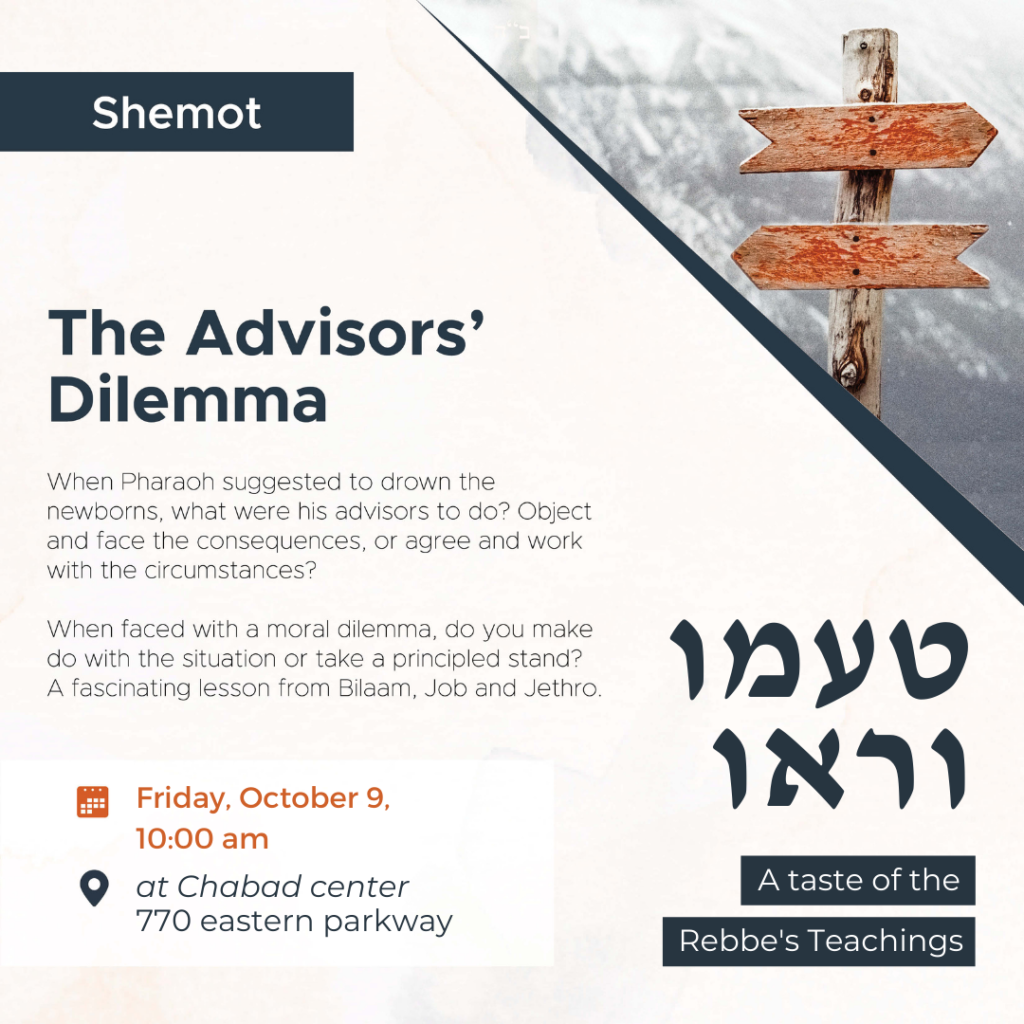