Joseph lived in a very unforgiving world. People weren’t as tolerant of other nations and other religions like today. Even the forefathers, who preached G-d’s word to the world, preferred to be shepherds, where they wouldn’t be forced to engage with the basest elements of idol-worshiping society. Yet Joseph was fully immersed in their world, and in fact, he was personally responsible for the survival of the very society he despised. Who taught him to be so forgiving?

Why Was Joseph Compassionate?

The third portion of Parshat V’zot Habracha recounts the blessing of Moses to the tribe of Joseph: “And of Joseph he said: His land shall be blessed by G-d, with the sweetness of the heaven’s dew, and with the waters that lie below.” One of the unique elements of this blessing is that it incorporates a mention of heaven—representing spirituality—along with a mention of “below,” representing a lower, material reality.

This blessing clearly suites Joseph, just as earlier in the Torah, when Jacob blessed his twelve sons, the Torah says that each blessing suited the unique spiritual character of the son; “He blessed them each according to their blessing.” Why did it suite Joseph? Because on one hand, he sustained and supported Jacob and all his children. When they were in Canaan, Jacob heard that food was available in Egypt and sent his sons to procure provisions for the family, and later, when the entire family came down to Egypt, he continued to support them, as the Torah says, “Joseph provided all the needs of his father, his brothers, and all his father’s family…” This sustenance is represented in the word “heaven,” the spiritual element of his blessing.

At the same time, Joseph was the primary provider of the entire Egypt. Egyptian society was considered the most depraved of its time. Torah calls it, “the nakedness of the land.” They were the polar opposite of Joseph, who is called “Joseph the Righteous” for ‘protecting his covenant.’11 Nonetheless, Joseph sustained Egypt as well. He even supported the priests of Egypt and made an effort to maintain their dignity (they were not asked to sell their land), notwithstanding the fact that they represented everything that Joseph despised. This is represented in the “below” in Joseph’s blessing.

Now, this poses the question: Who taught Joseph to behave in this manner?

God’s Tolerance for Adam and Eve

The answer can be found in the teaching of our Sages, “The righteous resemble their Creator.” We find that G-d Himself conducted Himself in the exact same manner. In the Torah portion of Bireishit, we read how “G-d made leather garments for Adam and his wife and He clothed them.” Our Sages note that the Torah practically begins by telling us about G-d’s act of kindness, and explain that we must follow G-d’s lead, “Just as he clothes the naked…you should clothe the naked,” because a person should always seek to emulate G-d’s behavior.

Now, Bireishit describes Adam’s life in the Garden of Eden both before the Sin of the Tree of Knowledge and afterwards—before he was expelled (as the Torah relates later on).

Notably, Adam lived in the Garden of Eden not only before the sin, but even after the sin of partaking of the forbidden fruit. G-d speaks of banishing him only later on, and only later carries out His decision.

It is surprising that he wasn’t immediately expelled; it would have seemed appropriate had he been chased out of the garden as an immediate consequence for partaking of the forbidden fruit.

…This is an important point: Adam transgressed G-d’s will, and the world’s spiritual state severely deteriorated. However, G-d didn’t punish him immediately. Instead, He waited, keeping Adam in the Garden, where he was surrounded by the greatest luxuries the world had to offer [the luxuries that we see as ‘reward’ were just commonplace realities for Adam in the Garden]. Then, G-d began a conversation with him—“Where are you?”—so that he could ‘catch’ himself and bring himself to repent. Moreover, G-d made them clothing and dressed them, which was the first step in helping them correct the mistake of the sin.

Think about it: Despite the terrible sin he just committed, especially taking into account that he was G-d’s personal handiwork, that he was living in the Garden of Eden, and that if he would only contain himself for three hours, he would be permitted to eat of the fruit! Nonetheless, G-d did an act of kindness—he dressed the very individual who had just created the potential of sinning for eternity.

[The Rebbe paused for a moment and commented:] We shouldn’t talk negatively about Adam; in fact, there is an argument whether Moshiach will be greater than him or not…

The point is, although punishment is a direct outcome of sin, and therefore—seemingly—it should follow the sin immediately, nevertheless, G-d waits and gives an opening for repentance, because the individual might repent in a manner which not only uproots the sin altogether, but even transforms the sin into a merit, and then, not only won’t he be ‘banished from the Garden of Eden,’ his ‘garden’ will be enhanced!

Every Person Has Something to Contribute

This occurrence—described in the Torah portion of Bireishit—taught Joseph that regardless of a person’s moral or spiritual state, there is always reason to have patience and await a transformation, and this served as a guide for his behavior in Egypt:

Even the priests of the Pharaoh, the greatest symbol of Egypt’s depravity—you never know what could become of them. Proof of the matter can be brought from Yitro, who served as a minister to Pharaoh and as a Midianite Priest, and was ultimately was the source of an entirely new Torah portion. His name, Yitro, means addition, representing his ‘addition’ to the Torah of Moses. This reflects the Talmud’s teaching that penitents have an advantage over those who were born righteous.

…This is also the meaning of Joseph’s blessing, “His land shall be blessed by G-d, with the sweetness of the heaven’s dew, and with the waters that lie below.” Joseph’s task is to bring blessing even into the lowest spiritual depths, even to the priests of Egypt, because even they can become holy.

This is the power of Joseph, about whom it is written, “The generous man is blessed, for he gives of his bread to the poor.”

Patience for Your Fellow

As in every Torah matter, this story has an eternal lesson. The story of Joseph is relevant (not only to Joseph in his day but also) to every single person, in every place and in every generation—including Simchat Torah 1964 in Brooklyn:

Some people do not have the patience to deal with others. I did everything that was within my power, they say, but didn’t manage to make a major impact on the state of Judaism. It would be better if I focus on my own spiritual growth.

…Today’s Torah reading teaches us and empowers us, beginning from the Torah portion of V’zot Habracha with Joseph’s blessing, his tolerance and kindness, and continuing with the Torah portion of Bireishit which speaks of G-d’s benevolence. When we encounter someone who needs assistance in whatever which way, we must put everything aside and make a difference. 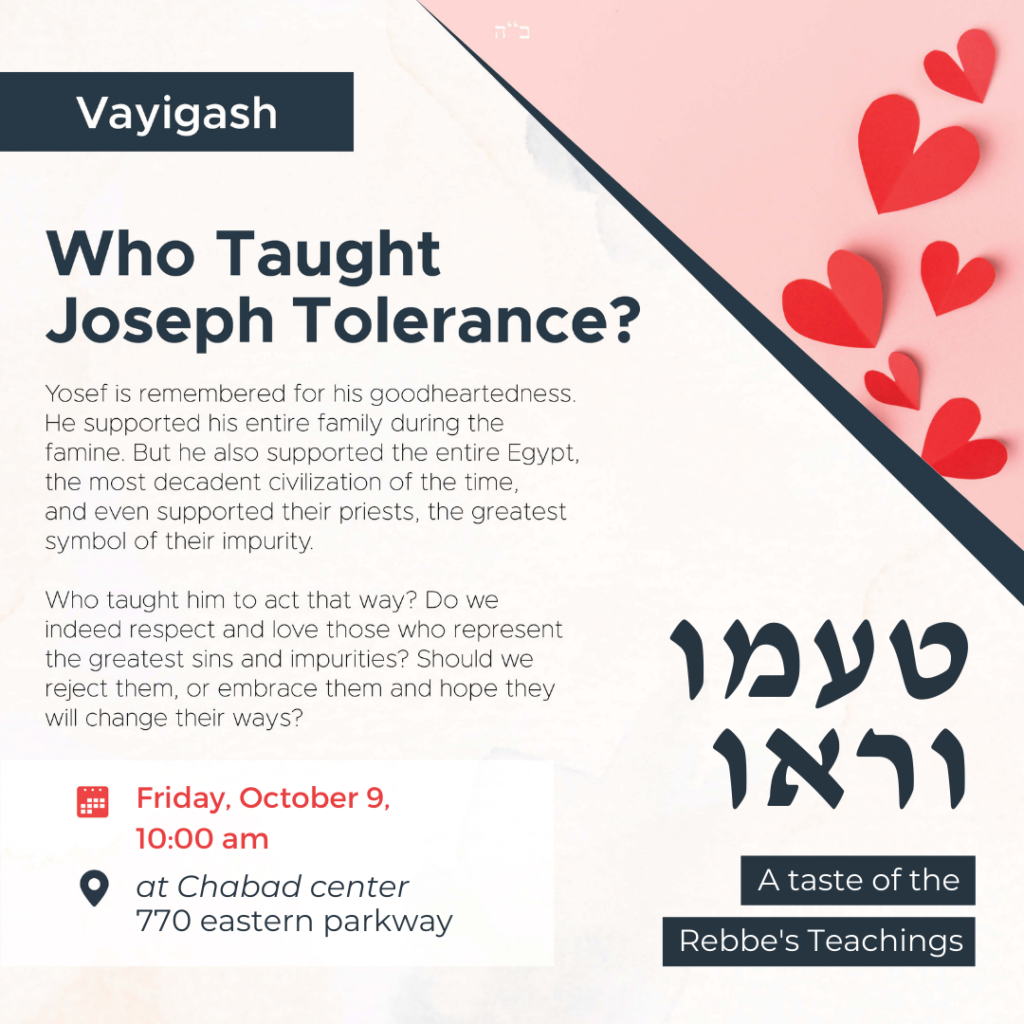