Until two hundred years ago, eighty percent of the world’s population was illiterate. The statistic among the Jewish population was the opposite: Eighty percent could read and write. How can we explain the difference? Insight into the age-old Jewish approach to education.

From Torah’s descriptions of the Israelites’ sojourn in Egypt and the style of Egyptian education, it is clear that our approach to Torah study is profoundly different than the Egyptian attitude towards education, specifically in regard to the concept of utilizing every person’s capacities.

In Egypt, education was made available to a limited group of people: the sorcerers, stargazers, and so on. These intellectual pursuits were a ‘closed book’ to the rest of the population; the masses were not granted access to any of the higher education Egypt had to offer. Thus, whenever a specific order was handed down to the population, it took the form of a command; they were obligated to fulfill it without understanding its value. It was given to them with the attitude that they would never comprehend it. ‘Understanding’ was the privilege of the upper echelons of society, not the simple folk.

When the people of Israel received the Torah upon leaving Egypt, they were commanded to employ their own intellect in the study of Torah.

When G-d spoke the Ten Commandments (which are a microcosm of the entire Torah and everything that will be added to it in the future), the entire nation (all six-hundred-thousand adult males and all the women and children) heard G-d’s words on equal footing with Moses. In other words, the Torah was personally given to every Jew, even the simplest among them.

This went into effect right when we received the Torah, the moment we became a nation, and remains in effect until the end of time. The Torah was given “to those who stood there on that day and to all future generations,” as explained at length in Midrash.

Therefore, the obligation to study Torah rests on every single Jew, from the greatest scholar to the simplest watercarrier. In the words of Maimonides: “Every Jewish person must study Torah, whether he is poor or rich, healthy or ailing, young or old…as the verse states: You shall study it by day and by night.” Even an ignoramus must study Torah, at least one segment every morning and night, because we are commanded to ensure that “this Torah scroll does not depart from your mouth.” As we’ve often explained, these few moments of Torah study will permeate the entire day and ensure that the entire day is infused with Torah’s spirit.

Torah’s novel approach was in direct contrast to Egyptian culture. The Israelites had lived in Egypt for several generations and could have (seemingly) been influenced by the surrounding culture (which preserved its wisdom for the elite). Therefore, as soon as they left Egypt, they were commanded to engage in the study of Torah on their own. Every individual was expected to utilize his own intellectual capacities to understand the Torah; G-d rejects the notion that scholarship is the realm of the few, and that the masses are only capable of following orders.

Even as a child just begins to speak, we are commanded to teach him Torah. We begin with teachings that are suitable for his young mind, but the very first concept, as per Jewish tradition, is the verse, “The Torah which Moses commanded us is the inheritance of the community of Jacob.” The first message he hears is the foundation for all future teachings: that the entire Torah is the personal inheritance of every single Jew.

At the Giving of the Torah, we were told that every Jew must make full use of his intellectual capacities, through Torah study and through meditating in the greatness of the Creator, bringing him or herself to love G-d, fear Him and fulfill His commands—because “action is the main point.”

In other words, on one hand we are told that “action is the main point”—carrying out the commands of the Torah is the most important aspect of Judaism. On the other hand, we are told not to suffice with knowing the commands and carrying them out. We are obligated to use our intellect to understand the meaning behind those commands (to the best of our abilities).

This combination (action on one hand and comprehension on the other) is also emphasized in the Ten Commandments themselves:

The Ten Commandments contain two forms of commandments, which are very different from each other:

Some commandments are very simple: “Don’t steal,” “Don’t murder,” “Don’t commit adultery.” In the positive commandments as well, we read “Honor your father and mother.” It doesn’t take profound wisdom to understand these commandments. Every normal person, even if intellectually challenged, understands the importance of these rules.

On the other hand, the opening of the Ten Commandments is “I am your G-d,” “Do not worship other G-ds…” These are theological commandments which call for profound meditation and intense intellectual efforts.

This idea (that every person must fully utilize his intellect and cannot suffice with knowing the practical application of the Mitzvah) brings us to an additional point: When G-d gives you knowledge in a certain field (and if he gives you material wealth as well), you must not hold it to yourself. To the contrary, be generous with it. Use your knowledge for the benefit of the public; don’t follow the custom of the Egyptian elite, who maintained their wisdom among themselves.

This is emphasized in the Laws of Torah Study: “Torah commands every scholar to teach students.” You are obligated to teach Torah to everyone within your reach, and obviously, your Torah message must bring practical results in the student’s day-to-day behavior, and that is accomplished, first and foremost, by being a living example.

Our behavior should be the opposite of the Egyptian sorcerers, who concealed their wisdom from the masses. In our day, there is a similar behavior—leftovers from an earlier era—among physicians. When a physician gives you a prescription, he writes it in hints and clues (lines and dots etc.) so that nobody will understand the message aside for the pharmacist and himself.

I don’t mean to insult doctors, G-d forbid; we all need their assistance. G-d bless them for their work. My point is to demonstrate that a residue of this behavior has remained with us until our times—to conceal certain knowledge from ordinary people. On the other hand, in addition to the prescription itself, doctors also write instructions for the medication in clear terms—how to use the medication, how often to take it, and so on.

This is the lesson on a practical level: When G-d gives you something special (for example, significant Torah knowledge) you must make every effort to share it with others. Don’t be stingy; share it generously and spread it far and wide. The same is true of physical belongings that G-d grants you. Don’t hold them for yourself; allow others to enjoy it as well. 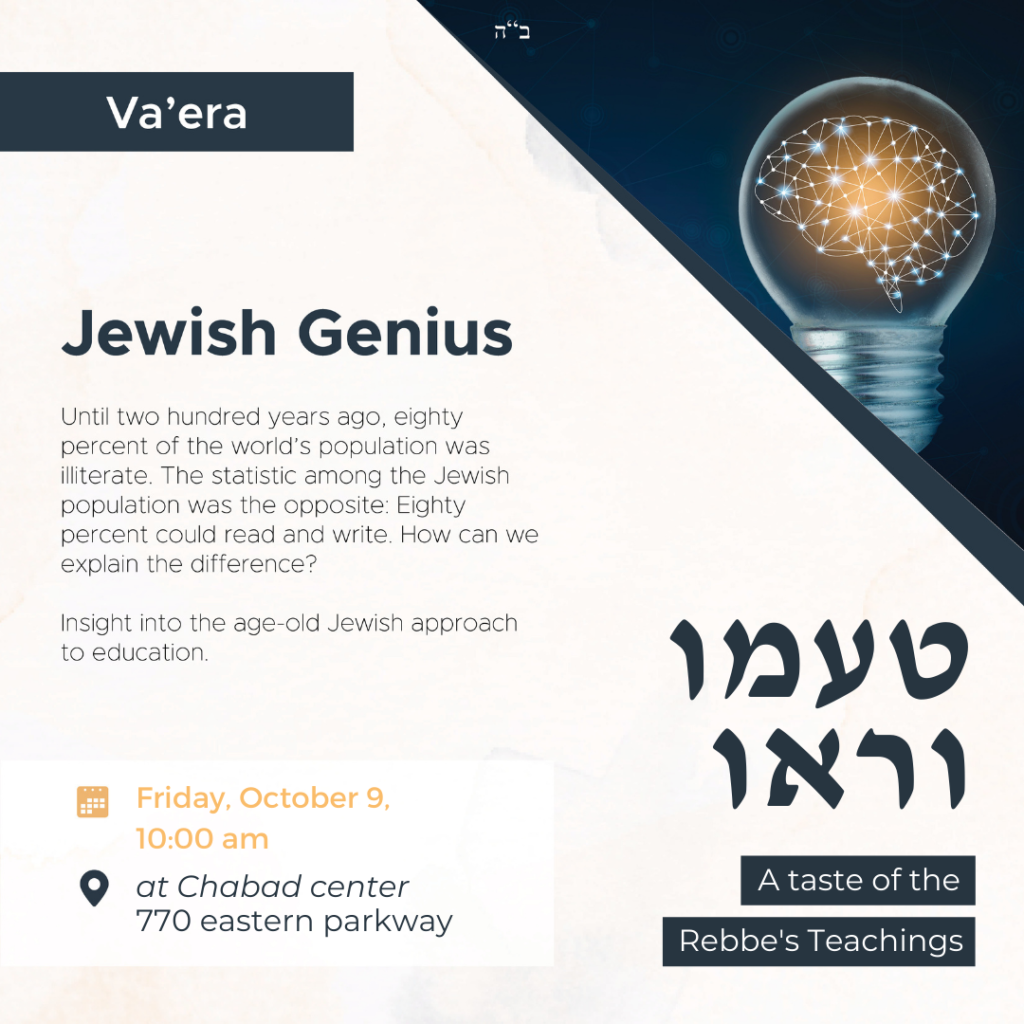