When G-d tells Noah that he plans to destroy humanity, Noah does not pound on the table and demand mercy. Why? Why didn't he act like Moses, who pounded on the table and prevented the Children of Israel from being punished? A deeper reading will shed light on Noah's reasoning and teach us how to judge others.

A. The Righteous Response

The Torah tells of three generations in which G-d wanted to destroy those who had sinned, and relayed this plan to the righteous who lived in that same generation. Each of the respective righteous individuals reacted differently: Noah accepted it as a fait accompli and did not say a word to the contrary. Abraham tried to argue that there may be some righteous people through whom the whole city can be saved, but when he realized that there were no righteous he gave up, while Moses prayed for the sinners and even gave his life for them. (Sources 1, 2, and 3.)

The Zohar says that due to this behavior of Noah, the Flood is named after him – “The Waters of Noah” – for we consider it his fault because he did not pray for them (Source 4). The Zohar also emphasizes that the perfect conduct was that of Moses, who asked for mercy for the sinners and was ready to give his life for them (Source 5).

In his talk, the Rebbe cites the above sources, emphasizes the virtue of Moses above the others, and concludes that since the Giving of the Torah, the way of Moses’ conduct is “the portion of all”: this is how each and every one of us should behave; not to just hole up in an Ark and take care of oneself and one’s family, but take care of the general populace as well.

B. Why Noah Couldn’t Pray

The Rebbe explains that the purpose of the Flood for forty days was to purify the earth, following the example of the 40 se’ah measurement of the ritual “Mikvah” bath. And indeed, the Flood did effect a purification in the world.

As the Alter Rebbe explains in Torah Ohr, that if the purpose of the Flood was only to destroy the world, *why* G-d could have done it in a single moment?! Why was all the tumult needed? The explanation is that since the world was very deeply defiled, the Flood came so as to purify the earth (Source 6).

In what was the purging and purification element expressed? It was in the fact that it was now attainable for people to return to good with repentance.
Until the Flood there were only two possible options: Either to be the righteous who studied Torah and kept the commandments, or to be from the wicked ones.

But there was no reality of a repentant sinner. And this was made possible by the purification of the Flood.

This fact explains why Noah could not see merit for the people of his generation. Finding merit comes from understanding an individual’s circumstances, as well as his difficulties. (As can be seen in the story of the Baal Shem Tov and his disciple). Noah, who had never experienced such difficulties and trials, and did not know the reality of repentants; he could not possibly understand what they are going through, and how it is altogether possible not to obey the commandment of G-d. He only knew they were sinning against G-d, so he could not arouse mercy on them.

Only after the Flood, when the world was purified and elevated and people could repent, (and especially after the Giving of the Torah), could the righteous individual indeed recognize the life-circumstances of sinners, to believe that they can repent and to see to arouse mercy on their behalf.

Also regarding Moshiach, of whom it is said, “he will be imbued with a spirit of fear for G-d; he will not need to judge by what his eyes see, etc”, This is how he will preside in judgment of the Children of Israel. He will understand the circumstances and will find how to seek merit for the sinners as well (Source 7). 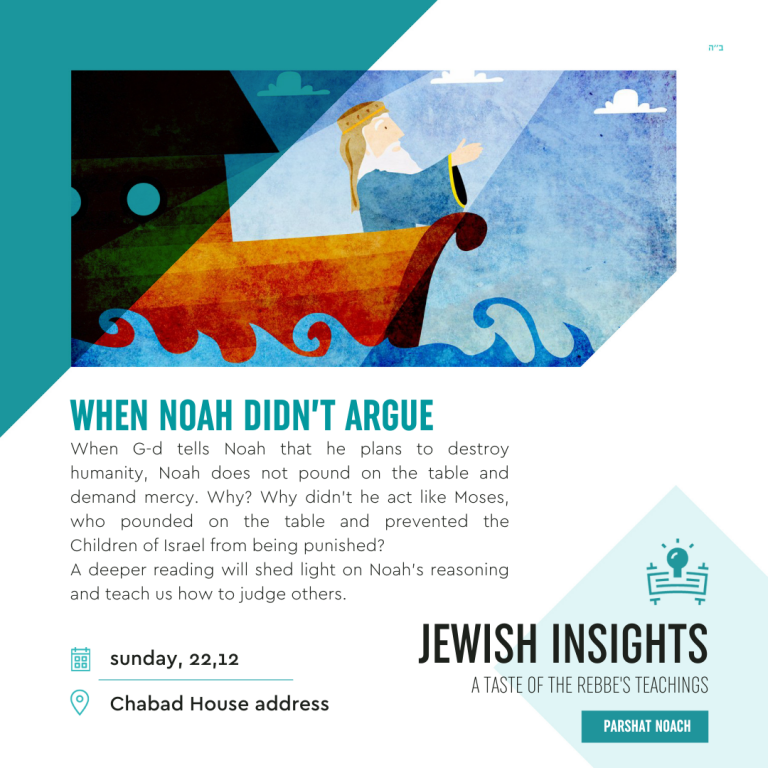 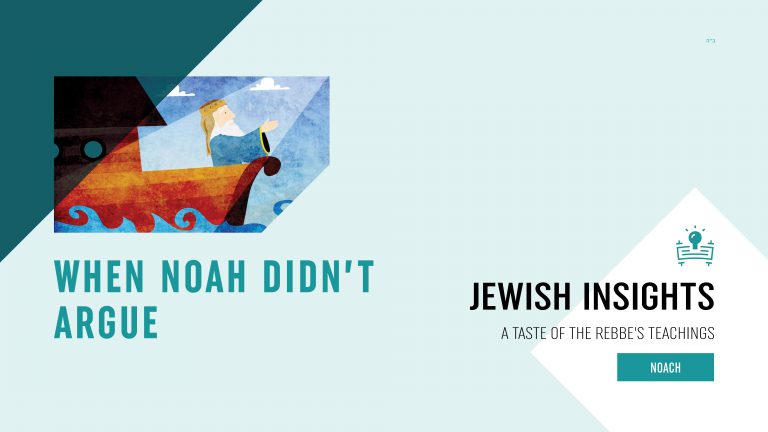