When was polygamy banned in Judaism? Who didn’t agree? Why was the initiator known as “Light of the Exile”? The history of Rabbeinu Gershom’s landmark enactments and their kabbalistic significance.

A. The Polygamy Ban

In this week’s Torah portion, we read about the possibility of polygamy. The Talmud records an argument over whether it is permissible, but the final ruling is that it is (source 1). However, it is worthy to note that in the Bible, polygamy was only practiced in very specific instances (teacher’s manual). In any case, this was the source of a divide between Ashkenazi and Sephardi traditions: Ashkenazi communities prohibited polygamy, while Sephardi lands were not as resolute (source 2).

It is interesting to note that there is a way to bypass this ban. According to Jewish tradition, rabbinic enactments could be bypassed with agreement from 100 rabbis in three different provinces.

This is not the only famous ban of Rabbeinu Gershom. In this week’s Torah portion, we read the rules about divorce (source 3). According to Maimonides (source 4) and his commentaries (source 5), the verse indicates that a woman may be divorced against her will. Rabbeinu Gershom made another very progressive rule: a woman must agree before being divorced (source 6).

Before jumping into the Rebbe’s talk, let’s examine another argument between the two communities: Ashkenazi Jews preferred to perform chalitzah, while Sephardi Jews recommend yibbum (source 7-8).

In this segment, the Rebbe explains the very practical reason for the differences in custom: Jews in Ashkenazi lands fared far worse than Jews in Sephardi lands. With that in mind, the rabbis in Ashkenazi communities preferred that husbands not take on the responsibility of more than one family.

D. The Light of the Exile?

In this next segment of the Rebbe’s talk (from a different occasion), he explains the spiritual significance of the entire discussion. Our relationship with G-d is like a marriage between husband and wife. When we are in exile, it is as if our relationship is in question. The enactments of Rabbeinu Gershom reflect a commitment from G-d that he will not “divorce us” or “take another wife.” This is why he is remembered specifically as “the Light of the Exile.”

However, the reflection goes in both directions. When we ask G-d to behave like a good husband and grant us a good new year, it is incumbent upon us to ensure that we act, within our own marriages, in the same fashion. 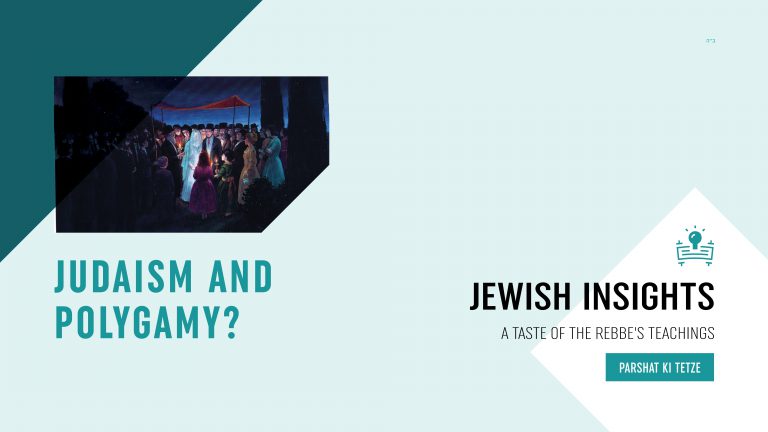