People are often quick to shrug off communal responsibility. Even Moses himself, when instructed to redeem the People of Israel, made every effort to avoid the mission. What does Jewish tradition say? Is communal work really for everyone? Does reincarnation make an impact?

On the verse, “These are the laws…” the Midrash comments:

“The Torah says: ‘With justice a king sustains the land, but a man of terumah tears it down.’ …If a person acts as though he were terumah which is set aside in a corner, and declares: ‘What concern are the problems of the community to me? What does their judgment mean to me? Why should I listen to them? I do well without them,’ he destroys the world. Hence, ‘a man of terumah tears it down.’”

Meaning: Terumah, the portion of food set aside for priests, is safeguarded in a corner of the home to protect its sanctity and to ensure it does not mix with the regular produce. If a person follows suit by placing himself in a proverbial corner of society and declaring, “I am holy and must not desecrate my sanctity by associating with others”—G-d says of him, “A man of terumah tears it down,” because this was not His intention with the creation of the world. G-d wants us to channel the greatest spiritual revelations to be internalized even in the lowest levels of society.

For this reason, the Chabad Rebbes in general and by my father-in-law, the [Previous] Rebbe in particular, sent out emissaries to engage with people of all levels. Their mission doesn’t only benefit those whom they bring closer to Judaism; it benefits the emissaries themselves, because they fulfill G-d’s greatest wish to bring spirituality everywhere.

The above-mentioned Midrash indeed follows on the same note:

“When Rabbi Asi lay dying, his nephew visited him and found him weeping. He said to him: ‘My master, why do you weep? Is there a single law that you have not learned and taught? Indeed, even now your disciples sit in your presence. Is there any kind deed you have not performed? Your greatest virtue is that you withheld from acting as a judge and didn’t allow yourself to take a position of control.’ [i.e. the nephew saw it as a virtue]. Rabbi Asi replied: ‘My son, that is why I weep. I may have to account for the fact that I refused to concern myself with the affairs of the Jewish people though I was able to do so .’ Hence, ‘a man of terumah tears it down.’”

It is not enough to study Torah and do good deeds as a private individual. One is obligated to serve the needs of the entire community from a leadership position and dedicate himself fully to their benefit.

Hence, the verse says, “With justice a king sustains the land.” When a person assumes leadership and tends to the needs of the community, he sustains the world. But when someone acts like terumah and confines himself to his own corner, even if he engages in deeds of loving-kindness, “he tears it down.” His lack of leadership creates a void, and he is therefore considered to have “torn it down.”

However, the Evil Inclination is cunning. He might approach you and argue, “This all may be true, but it doesn’t refer to you… Everyone has their personal path, and your path is to be a terumah. Proof of the matter is: you do not have the character of the communal activist!”

The Evil Inclination understands that the individual could counter-argue that he does have the necessary abilities and his reticence is merely a result of self-centeredness. So the Evil Inclination has a new idea: He will persuade you that even other people think you don’t have the necessary abilities. And although communal activism is very worthy indeed, it is simply out of character for you; and since you can utilize your time for all sorts of worthy endeavors, communal activism is clearly not your G-d-given mission.

The response is, first of all, that these arguments might have no basis because they come directly from the Evil Inclination, when in fact, you are inclined to this form of work.

Moreover: Even if it is indeed out of character for you, the very fact that you were asked to engage in communal activism means that this mission has a soul-connection with you.

Does it seem otherwise? In Judaism, there is a concept of reincarnation. Even if it doesn’t seem right to you in your current state, it is possible that in a former life this was a mission you needed to accomplish [and it still needs to be carried out].

Interestingly, the Zohar’s writings about reincarnation are on this very verse…

This idea is explained in Maaseh Oreg on the Mishna, regarding the Mishnah’s reference to the words “emet l’amito, the truth of the truth.” What is the difference between that and ordinary truth? To explain, he shares a story of the Baal Shem Tov:

A person once entrusted money in the hands of a friend, and the friend died. When the depositor approached the heirs, they denied any knowledge of the incident. As per Torah law in a case where there are no witnesses, they swore in Rabbinical Court that they had no knowledge of the matter and were excused from the case.

However, it was common knowledge that the depositor was right. Everyone knew him to be an honest man, and they also knew that the heirs inherited a sum of money far beyond their father’s means.

They came to the Baal Shem Tov and asked: The Rabbinic judge followed the ruling of Torah, the Torah of truth. If so, G-d surely upholds and supports that very decision. No doubt, it reflects the truth. But how does it concur with the reality?…

The Baal Shem Tov responded: In a previous incarnation, the depositor owed a similar sum to the diseased or to his children. So the ruling was just. The money does, in fact, belong to them.

Maaseh Oreg thereby explains the term “truth of the truth.” Sometimes, a ruling doesn’t seem correct from our earthly perspective, but it does, in fact, mete out justice, in light of details which are not known to us in this world.

This story is about a material item—there is a possibility that you will know, without a shadow of a doubt, that you do not owe someone money, when in fact, according to the truth of truth you actually do. If so, the same can be true on a spiritual level. The true truth is that based on a previous incarnation, or due to some circumstances that only your soul is aware of, you owe a spiritual debt to your friend. And you are therefore being dispatched to fill that debt. 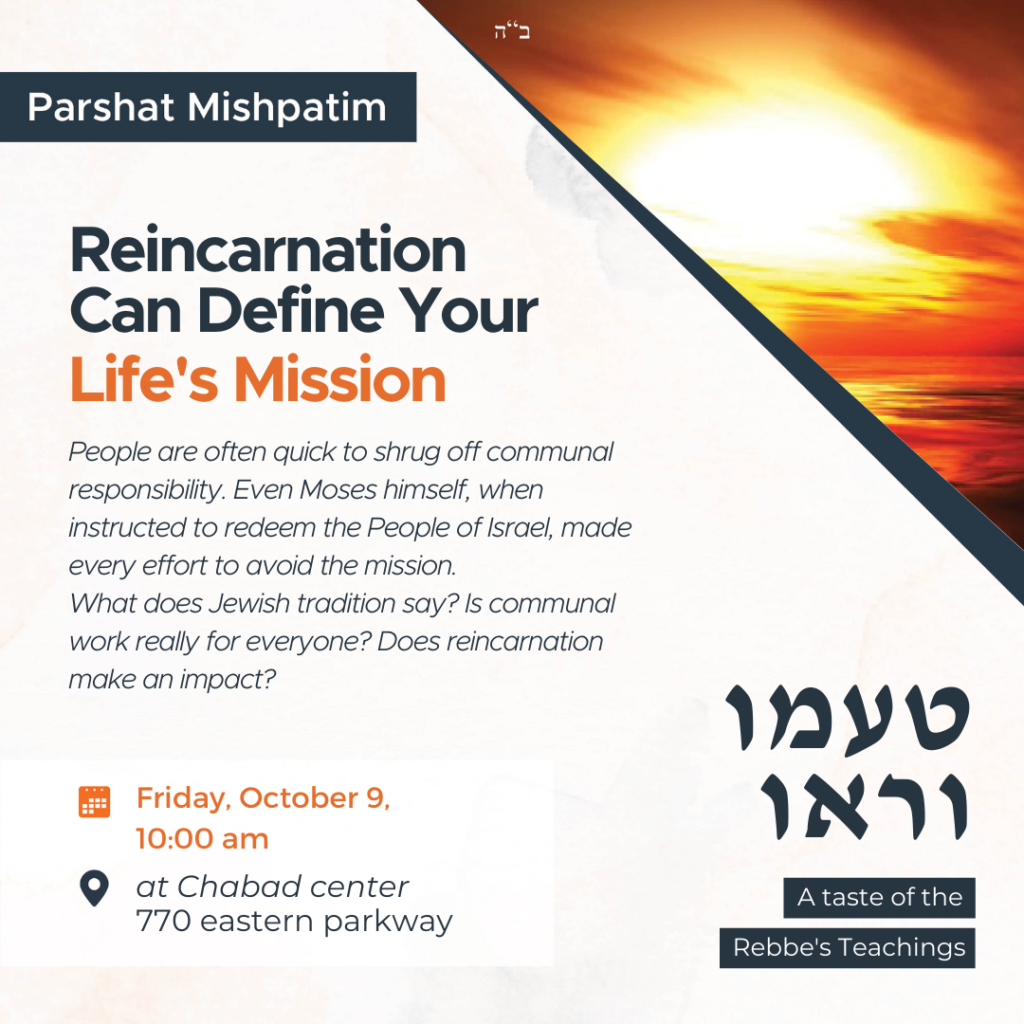